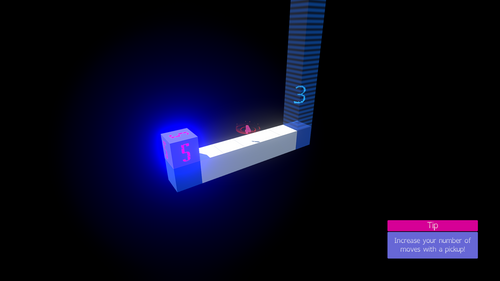 As I think up more and more levels for Overnumerousness, I have released a DEMO version for trial and comment.

In this demo, you can play the first 10 levels. Please let me know what you think!
The finished game will have at least 50 levels (though I am hoping for 100 if I can do it) and cost around $5.99.

I just played the demo. Personally, puzzle games have never been my thing but I still thought what you made was pretty clever. A few things I wanted to point out.

First, on the main menu, I actually had a difficult time trying to start a new game. I tried clicking on New Game and nothing happened. Eventually I figured out that spacebar did the trick but unsure if that was intended or not.

Second, I think there should be an option to rotate the camera. Specifically, on level four there was an instance a couple times when I was trying to determine my steps but I couldn't see the number pickup that was behind my block. I think the ability to rotate the camera or have some type of transparency on the character when its blocking a pickup would help with that.

Finally, I think having and indicator to show the block's facing might be a good idea. What I mean is some sort of arrow pointing where straight forward would be. On the last level specifically, I kept going the wrong way or falling off because for some reason I kept thinking backwards meant coming towards the screen when in actuality I needed to go right. I think it may have been because the angle of that level had been a bit different from the other levels and because it was a lot larger.

But good work! Seems like you have something solid here.

I  had thought about camera rotation, but I  worried it would make the controls more confusing.  I can see it would help to view the pickups though.

Right now I am updating the controls so it's not limited to the keyboard. I am not too familiar with the new input system, but getting there. Ill implement a mouse for the menu at that time too. I may add a control display to the bottom left for in-game too as an indicator of direction, but also as touchscreen controls for mobiles and tablets.

Thank you! It is very helpful.